Black Ramen. When leafing through a guide of 1100 ramen shops in the Tokyo metropolitan area, a pitch black bowl of soup is bound to stand out. Gogyô's bowl of ramen was calling out to me, and today I found myself taking care of more errands in Roppongi, within easy striking distance of Nishiazabu, home to one of Gogyô's several locations. Nishiazabu Gogyô is located on a tucked away block, in a strange little corner between the Aoyama Cemetery, the National Art Center, and, weirdly, an American military barracks that I got in trouble for photographing. 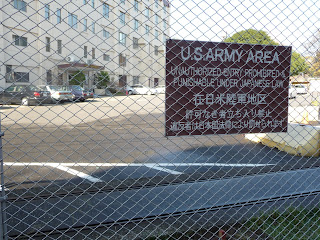 As befits the posh Nishiazabu address (whose presence BEFORE the name of the shop is definitely not an accident), Gogyô is visually entirely unrecognizeable as a ramen shop, at least in any conventional sense. A broad patio lined with chairs spreads out in front of the casual bistro-style awning - I wonder if they do al fresco dining in the spring and summer here? 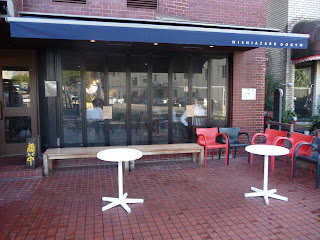 The swankity continues inside. Although there are counters, they are outfitted with big chair-like stools, and the majority of the dark-wood interior space is filled with plush leather couches, which the afternoon light streaming in through the plate glass storefront prevented me from getting a good photo of. 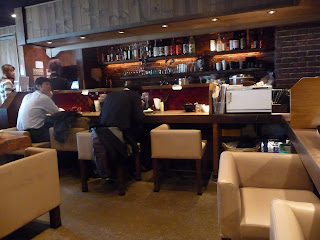 Gogyô (named for the five elements of Chinese cosmology) takes the "upscale ramen" concept to a whole new level, feeling more like a fancy cafe that happens to serve ramen instead of a ramen shop aiming for a high-class feel. The clientele was a mix of fashionable couples and foreign businessmen on lunch break, with a few construction workers thrown in for good measure. For being such a frou-frou place, Gogyô offers an extremely generous lunch special - choice of ramen, choice of salad, and choice of rice for 1000 yen. While waiting for my order to come up, I browsed through the glossy brochure and was unsurprised to discover that Gogyô is a spin-off from the Ippûdô empire. Ippûdô is, of course, one of the first shops to "elevate" Hakata ramen on the national scale and serve ramen in a fancier "restaurant-type environment," so it wasn't surprising to see them branching out and trying something even more high concept and upscale. Gogyô has all the same little nice touches, like fresh pepper to grind and tea instead of water for tableside refreshment. 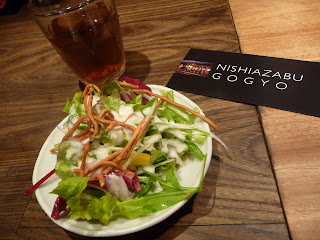 Although the trademark "black ramen" is obviously the big draw point, Gogyô serves up a full menu, with choice between shio, shôyû, miso, and tonkotsu, as well as a larger than average menu of side dishes, including fried chicken, cucumber salad, and Mascarpone cheese tarts, in addition to an impressive selection of chilled sake. It seems like they have an even more extensive menu at night, with a range of carefully plated traditional Japanese and fusion dishes. 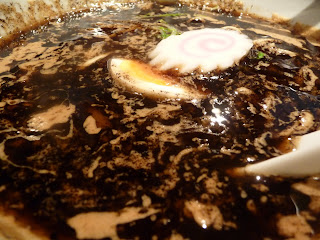 So, what about this black ramen? The proper name is kogashi miso, "burnt miso ramen," but they also offer a slightly less black "burnt shôyû." I'm not entirely sure if it's miso paste itself they are burning, or something else that is simply layered on top of the miso, but it's different from Ippûdô's trademark black mâyû (charred garlic) oil. Whatever it is, there were huge flames periodically leaping towards the ceiling from the stoves behind the glassed-in kitchen. When my bowl came up, one glance told me that this was definitely "impact ramen", taking you outside the realm of the expected. Thick layers of black carbon particles swirled amidst the creamy miso base, making for an incredibly rich and almost sweet soup. The soup had almost nothing to do with a standard miso bowl, tasting more like Chinese grilled and spiced chuanchuar skewers or Korean barbecue, an impression reconfirmed by the taste of the burp I just let rip. 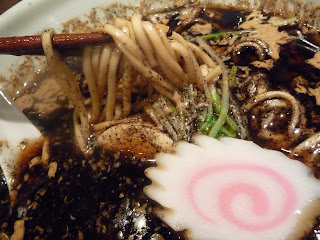 As for toppings, Gogyô's bowl was one of the few I've ever had to lack green onions and menma (bamboo shoots), with only a soft pink naruto (fish cake) and half of a soft-boiled (hanjuku) egg, along with a few shreds of raw white onion that added to the overall "grilled" impression. It looks like the other styles of ramen on offer each have their own carefully selected sets of toppings, with cabbage on the tonkotsu, and so forth. The downside of the layer of burnt oil on top is that it keeps the soup extremely hot - Gogyô's is probably the highest temperature bowl of ramen I've ever eaten. Having a bit of what they call a nekojita (cat's tongue) in Japanese, I ended up having to wait a few solid minutes for the soup to cool down, after first making the mistake of putting some unpleasantly hot soup in my mouth. The only other negative mark Gogyô gets is for the noodles, which were more like ever-so-slightly-flat thin pasta noodles than standard ramen noodles, and felt a bit limp to me. But when the soup is this fucking delicious, I'm ready to make a lot of allowances. I enjoyed dumping my mixed grain rice in the soup and slurping the broth up as much as I liked eating the ramen itself - it's hard to express just how exceptionally complex, unique, and delicious a bowl of soup Gogyô's burnt miso is. 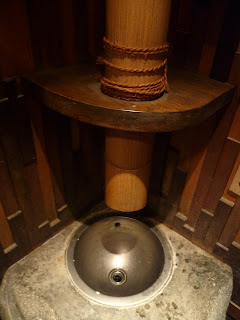 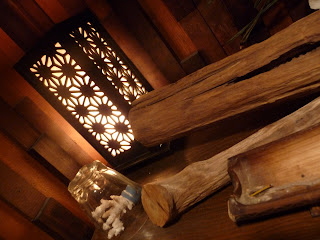 On my way out, I stopped in the bathroom, which was of course equally impressive, with hardwood walls and a sink where the water dripped out of a hollow piece of bamboo. Gogyô is definitely a ramen shop in a class by itself, and if you're ever in the neighborhood, it's definitely worth seeking out.
Posted by Nate at 8:31 PM

The question I have to ask is,,, have you met a bowl of ramen you didn't love?

you are a noodle junkie!