The noodles with which this post concerns itself were, strictly speaking, in no sense ramen, but nonetheless they were so bomb that I couldn't but write them up. The other day I had to take care of some business in Roppongi - Tokyo's foreigner district par excellence and not a place I am particularly fond of. The Nigerian restaurant I had been hoping to hit up was closed for lunch (as seems to be the custom for Nigerian restaurants in Japan), so I wandered the streets looking for a Plan B until the following sign caught my eye: 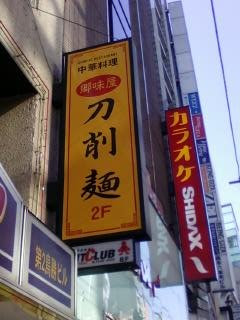 A sign advertising daoxiamian (tôshômen in Japanese) - literally "knife-cut noodles." Daoxiaomian are noodles shaved off a block of dough using, surprisingly enough, a big knife. Done properly, someone in the kitchen has the skilled but thankless task of holding a huge lump of heavy dough in one hand and a knife in the other, flicking off one noodle at a time into a huge pot of boiling water. I fucking love daoxiaomian. Were it not for Hakata ramen, daoxiaomian would be a top contender for the top banana of my noodle totem pole, though I don't think noodles would make a very good totem pole. I'd wax poetic about them further, but I've saved a full recanting of my life with daoxiaomian for another post (see immediately above).

The second floor location was a good sign (less dependent on casual walk-ins), as was the fact that the word daoxiaomian was written approximately ten times bigger than the name of the restaurant itself, which, for the record was 郷味屋 (Kyômiya / Xiangweiwu - loosely "Hometown Flavor").
This was looking like a very good plan B.

Inside, the place was packed with local office workers, one of whom I ended up sharing a table with. It was a full service Chinese restaurant, but everyone I saw was eating the titular daoxiaomian. The mala (spicy and numbing) noodles were calling out to me, and I pulled my rusty Chinese out of the cupboard to order with so I could make sure I got my noodles extra spicy and not decanted to the Japanese pallet. I could tell from the smell as soon as the noodles arrived that these were the real deal. I took a minute to assess the high degree of various pulverized peppers floating in the bowl, then proceeded to start mixing and slurping. 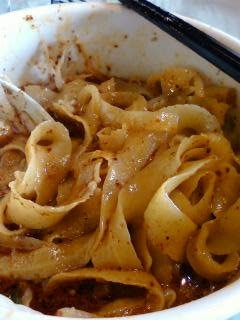 Due to their knife-cutness, daoxiaomian are very thick, very wide, and very uneven. While perhaps not the super fattest, chewiest daoxiaomian I'd ever eaten, these noodles certainly came correct. These are the kinds of noodles you can only pick up one or two at a time. Coming correct would also be the appropriate term to describe the level of spiciness - although they didn't make me cough the way Nong Inlay's noodles do, Kyômi-ya's mala-men left my lips alternately burning and buzzing from the combination of the red chili peppers and the generous helpings of huajiao numbing flower peppers (sanshô / mountain peppers in Japanese). The soup was red enough that someone could have been murdered in it, and a weaker tongue may well have not made it out alive. 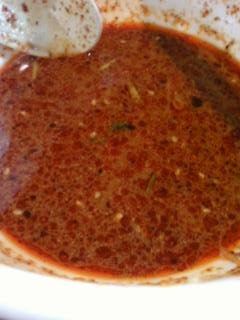 The ground huajiao gave the soup a nice bit of grit that stuck to the noodles, making a bowl with far more character than your average thin soup. All this was enough to balance out the fact that the toppings were a wee bit lacking - only a few token shreds of cilantro (perhaps to be expected in Japan) and a small pile of bean sprouts. Most disappointing however, was the absence of proper Shanxi-style dark brown sorghum vinegar to top the noodles off. But when a restaurant serves up noodles that taste like they could make it in Chongqging, I'm not going to begrudge them a little vinegar. There seem to be a few other tôshômen (as it were) restaurants around town, so I'll have to put Kyômi-ya's bowl to the test when I'm taking off days from ramen-eating.
Posted by Nate at 1:53 AM

An individual's lash as well as migrate are typically altered as well as improved effective to the phantasm ruby near the scholarship. Costumes rock Halloween costumes

I appreicate that you produced this wonderful article to help us get more knowledge about this topic. I know, it is not an easy task to write such a big article in one day, I've tried that and I've failed. But, here you are, trying the big task and finishing it off and getting good comments and ratings. That is one hell of a job done!Schlüsseldienst Innsbruck

Hellos craze for acting started in lofty college, during by happen he walked by the tragedy group also saw the undergraduates acting love poultrys.termite treatments

I’m extremely impressed with your writing talents as smartly with the format for your blog. Is this a paid topic or did you modify it yourself? Either way keep up the nice high quality writing, it is rare to look a great blog like this one these days.port dover real estate

A debt of gratitude is in order for setting aside an ideal opportunity to examine this, I feel unequivocally about it and adoration adapting more on this subject. On the off chance that conceivable, as you pick up aptitude, would you psyche overhauling your web journal with additional data? It is to a great degree accommodating for me.70's fashion

The construction of hydronic controls will be very easy if we take proper care on power supply, load, switch, combination controls, panels etc. If these things are utilized properly hydronic controls can be made at moderate budgets with high efficiency.Second home

You have shared valuable and inspirational stuff to us. Thanks for sharing your post with everyone. I would like to get more stuff from you. it's new function in game sims 4 cheats the spell of realm magic.