The tonkotsu binge continues. After revisiting Miyoshi in Kyoto over the weekend, all I wanted was more, more, more Hakata ramen. I had a mid-morning appointment at the doctor's office in Tsukiji, so I figured I should take advantage of the opportunity to try a bowl of ramen in a neighborhood I wouldn't otherwise find myself in. Tsukiji is just a stone's throw from Ginza, so the first place that came to mind was Kurume Ramen Kinmaru, a shop I'd been wanting to try for about a month. I had never heard of "Kurume Ramen" until just a number of weeks back when I was reading Rameniac's site, trying to fill in gaps in my knowledge about the details of specific local styles I wasn't familiar with. However, once I had read about Kurume ramen, I knew I needed to check out Kinmaru.

I would doubt very highly that there is anyone in the English-speaking world who knows as much about Hakata and Kyushu ramen as the Rameniac. The dude has lived in Fukuoka and makes trips back seemingly for the sole purpose of eating ramen. I was struck with a bad case of insomnia one night and ended up salivating over his tonkotsu-related words and photos nearly until dawn. Perhaps the most intriguing piece of information I gleaned that night was the fact that the small town of Kurume claimed to be the birthplace of what has become Hakata ramen, and perhaps even Kyushu ramen in general. Putting aside my Derridean doubts about the concept of the origin, Kurume ramen sounded incredible, and I knew that if I was serious about ramen, I had to try it sometime. According to the Rameniac's description, Kurume ramen resembles Hakata ramen (or is it the other way around?), but is a bit more "rustic," old school, and porky.

Hakata is quite a schlep from Tokyo (and it sounds like Kurume is another half-schlep from Hakata), so, until some fateful day in the future when I can make the pilgrimage, I would have to make do with the closest approximation in the Tokyo metropolitan area. The Goog turned up one result - Kurume Ramen Kinmaru in Ginza. Though Ginza is a bit of a schlep (albeit of a different magnitude) from Takadanobaba, I was itching for a chance to find myself within striking distance of Kinmaru, so today was a perfect opportunity. 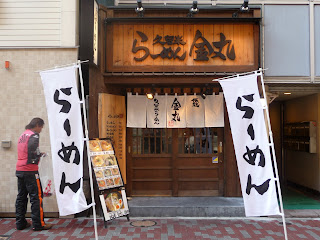 Walking through Ginza towards the shop and passing throngs of salarymen with their ID cards dangling from their necks, it dawned on me that Kurume was probably a popular spot for businessmen to grab a quick lunch. Ginza is one of the major office and banking centers for the country, so there are thousands of hungry middle-aged men cruising the streets every day between 11 and 1. From the outside, Kurume looks like almost any other middle-high end ramen shop - neither down at the heels nor fancied-up and high concept. I was somewhat surprised to see a sandwich board outside advertising not only the house special of Kurume-style tonkotsu, but also tsukemen, wonton-men (with dumplings), and a spicy-looking tantanmen-esque bowl called karamen. I guess when you need to draw in the business hoardes you have to spread a broad net. 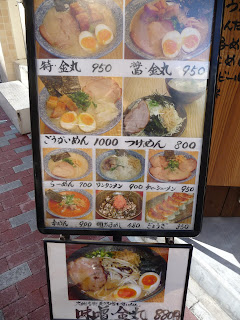 Inside, it was high effenciecy and hospitality, with a kerchiefed staff person waiting at the door to answer questions, facilitate orders, and give assistance with the ticket vending machine. The long counter was mostly full, so I squeezed in between a couple besuited slurpers and waited for my order to come up. Besides the office types, there was a fair smattering of motorcycle delivery guys and construction workers, but it seemed like a Y-chromosome was a necessary condition for entry. 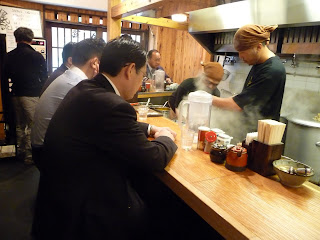 Perhaps due to its pedigree, Kurume takes the firmness of its noodles very seriously - while many Kyushu-style joints will offer noodles katame (al dente) on request, Kurume goes whole hog (as it were) with no less than five levels of firmness to choose from. The toothsomeosity of the noodles seems to be one of the characteristics of Hakata ramen mostly ignored by shops in Tokyo; this is fine by me, since I'm a bit of a wimp when it comes to hard noodles, but Kurume clearly takes pride in maintaining the tradition. Noodles can be boiled yawame (soft), bari (hard), bari bari (very hard), mecha bari (super hard), or kona otoshi, which implies that the noodles are dipped into the water just long enough to rinse off the excess flour. Given the options, I felt like a bit of an ass having just muttered futsû (normal) when I put in my order. 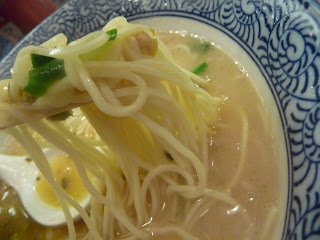 Sure enough, when my bowl came out the soup was not the bone white of typical Hakata, but a muddier brownish white, probably due to the presence of shôyû in the stock in addition to pure tonkotsu, just as Rameniac had described in his Kurume posts. Kinmaru also advertises that they use no preservatives or artificial colorings in their noodles or soup, so that may have had something to do with it, though I would hope that other shops don't use food coloring to get their soup proper Hakata white. I'm willing to bet that Kinmaru probably changes the way they prepare their soup so as to better meet Tokyo tastes - I was expecting something super stinky and porky as all hell, but Kinmaru's broth is surprisingly mild and rich at the same time, or as they put it, maroyaka. 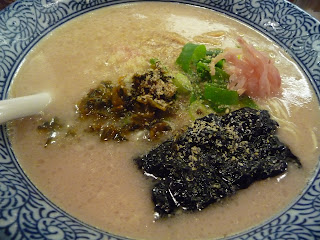 The addition of shôyû definitely changes the fundamental taste of the broth compared with standard Hakata. It's a bit more complex, and even has hints of a Jirô-like taste. Although I don't think Ginzaites would do to have bits of gritty marrow in their soup, there was a higher than average amount of suspended fat, which you don't often see in straight Hakata soup. The noodles were ever so slightly thicker than typical Hakata noodles, and they also offered special thick flat noodles, though I'm guessing those are for the other broths, rather than the traditional tonkotsu. 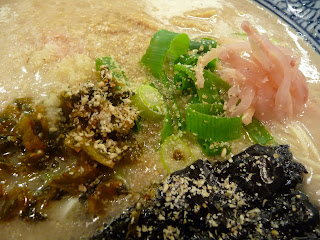 And then the toppings. Kinmaru definitely gets this right. The beni shôga was a bit colorless, but I'm willing to give them that, since the spicy takana and ground sesame were in order, as well as the always welcome presence of a fresh garlic press, which I may have gone a little overboard on. 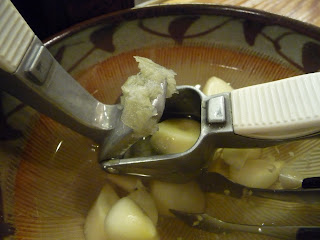 Like with any good bowl of Kyushu ramen, the full flavor of the soup came out in the blend of garlic, ginger, chili, and sesame added to the base, and I couldn't help but order a kaedama despite the already larger than average helping of noodles. One nice touch was that the extra noodles came on a plate loaded with menma (bamboo), green onions, and sesame seeds. Some Hakata style places serve a small bowl, but there was more than enough to go around at Kinmaru. 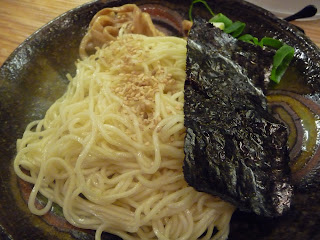 By the time I finished my second helping of noodles, I was full, perhaps uncomfortably so, but I was also extremely satisfied. I'm willing to bet that a Kurume native would probably scoff at Kinmaru's ramen, but this is Tokyo, not Kyushu, so I would be more than happy to slurp another bowl there. These are noodles that would satisfy any tonkotsu fan, and the little bit of difference in the broth and noodles keep Kinmaru from being just another Hakata imitator. It looks like I'm going to have to make a few more trips back to the doctor in Tsukiji, but the silver lining on that cloud is the possibility of more trips back to Kinmaru. One of these days I've got to satisfy my curiosity as to just how hard kona otoshi noodles are...
Posted by Nate at 4:38 AM