After the disappointment of Watanabe, I wanted a bowl of ramen I knew I would enjoy, so I sought out a nice little tonkotsu close to home. Just south of the Babakuchi intersection, on the west side of Meiji-dori is Yamagoya (Mountain Hut), which had some how escaped my attention despite being so close to where I live. With a big red sign out front screaming Kyushu ramen in professionally printed letters, Yamagoya looked to be another competitor vying for the title of national chain restaurant Hakata-style king. 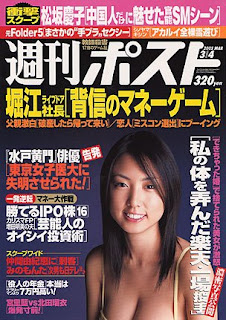 I was the only customer, but it was mid-afternoon and raining again, so it didn't really bother me. The cook was young and a bit talkative, at least for a ramen cook. There was a menu item called "student ramen," so I asked the cook if that meant there was a student discount, or if it was actually a different dish; he replied that the student ramen used a cheaper kind of pork, but was otherwise the same, so naturally I ordered that since I wasn't going to eat the pork anyways. A steal at only 500 yen in this day and age. Unfortunately, takana wasn't free, so I had to shell out a bit to get that topping, but I can't complain. After garnishing the bowl with a heap of ground sesame and plenty of bright red beni shôga, I had a fully loaded bowl of Hakata ramen that was, while not especially "deep" or mind blowing, very tasty and well-executed. 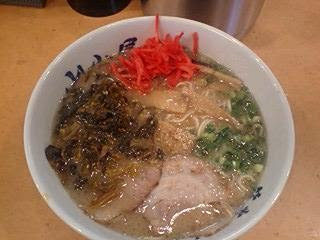 Of course, kaedama noodles were available, but I opted for a small order of mentaiko (pink cod roe) and rice, a steal at only 50 yen (!) Not the fanciest mentaiko in the world, but again, for 50 yen, I can't complain. It seems like this branch of Yamagoya just opened up last month, and it's a nice addition to the neighborhood, especially at such shockingly low prices.
Posted by Nate at 10:16 PM