One of the more exciting ramen-related experiences of my life was totally unplanned and unintended. A little over two years ago, I took my long awaited first trip to the northern island of Hokkaido. I was pretty broke, so I took the slow and low route, sitting on local trains all day then taking a ferry over from Honshu. I had two weeks in front of me during which my only plans were to climb as many mountains as possible, eat as much uni (sea urchin) as possible, and bathe in as many hot springs as possible. Ramen didn't really fit into the equation. But sometimes you go looking for ramen and sometimes ramen comes looking for you.

I spent three days hiking across the top of Daisetsuzan (Great Snow Mountain) National Park smack dab in the middle of Hokkaido. The scenery was great, the hiking was great, but it had started raining on day two, and by the time I made it down on day three I was exhausted, dirty, and ready for a hot meal that didn't consist of foil packets of curry held against my stomach to warm up. 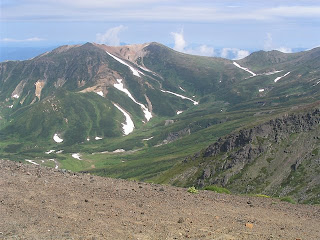 My plans to grab a meal in the hot spring village at the end of the trail were stymied since none of the local inns had cafeterias, at least none that were open. One of the proprieters felt bad for me and gave me some free bread and cookies from the gift shop, which was pretty cool, but I was highly unsatiated. I took the bus back into Asahikawa, the nearest city of any size, and was greeted with basically the best possible welcome - the annual ramen festival was in full swing. 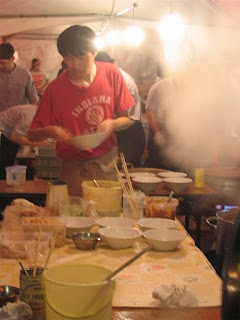 In Hokkaido the summers are short and the winters are long, so people like to get down while they can. In my two weeks travelling around I stumbled across 3 or 4 different local festivals. Since Hokkaido was only comparatively recently colonized and settled by Japanese people, the festivals don't really focus on any traditional activity, but are more about just getting drunk and dancing in the street. Asahikawa is, along with Hakata and Kitakata, in the first rank of nationally known ramen centers, and that night every shop in town had set up a stall outdoors where you could get mini bowls of their own famous noodles and soup. I didn't have the first clue which of the shops were any good, so I just lined up in whichever queues were the longest and hoped for the best. In a place like Asahikawa I think it's hard to misfire even when shooting blindfolded. 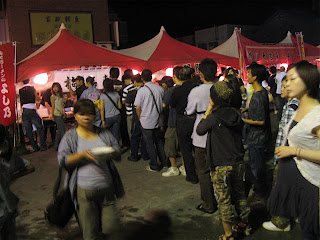 To be honest, I can't remember the first thing about the ramen I ate that night. I was too hungry to care, and anything would have tasted great. At the time I think I was under the impression that Asahikawa ramen was shio, but I guess it's actually tonkotsu with a bit of a seafood blend. According to Japanese Wikipedia, there's also something unique about the shôyû and the miso, but I guess I'll have to wait until next time I'm in Hokkaido to find out. That night I just focused on getting food in my stomach, getting a beer, and savoring the atmosphere. Walking down out of the mountains starving and tired to find a citywide ramen festival is was like something out of a dream, a very good dream.
Posted by Nate at 7:40 AM