What can be said about Jirô that has not already been said a thousand times over? Perhaps the most legendary (infamous might be a better word) ramen chain in Tokyo, Jirô is like none other, and, according to some, is so different that it cannot even be considered ramen, just "Jirô." I wouldn't go that far, but eating Jirô is certainly an experience unto itself.

Having eaten at the Takadanobaba bracnh of Jirô several times before in years past, I knew what I was in for, and came prepared. It actually took me a while to get around to eating at Jirô this time, since I had to mentally and physically prepare myself before I could sit down for a bowl. I kept telling myself "next week I'll go, next week I'll go," but kept not getting around to it. Then I finally steeled myself to bite the bullet, but when I showed up, my initial delight at the lack of a line quickly turned into disappointment that I had showed up on the teikyûbi, the one day a week when the shop is closed.

Why all the consternation? Jirô pretty much has a grip on the title of being the biggest, fattest, oiliest, most intense bowl of ramen out there. Noodles hand cut, uneven and thick as hell, tons of suspended fat floating in the soup, cooks wearing knee-high galoshes to walk around on the floor slick with soup and oil spilling from the overfilled bowls. Jirô is like the anti-Ichiran (described below). Crowded, raucous, in your face. Also crucial to the Jirô experience are the toppings. As is well documented elsewhere, the cook (generally) asks you "Ninniku iremasu ka?" (You want garlic?) to which you respond with set phrases indicating the amount of each of the four toppings available for free: garlic, vegetables (cabbage and sprouts), extra spicy topping (karame), and just plain old pig lard, layed on top of your noodles. Each of these can be ordered mashi (extra) or mashimashi (extra extra). For an awesomely detailed rundown of everything Jirô in English, see: http://ramentokyo.com/2007/06/ramen-jiro.html 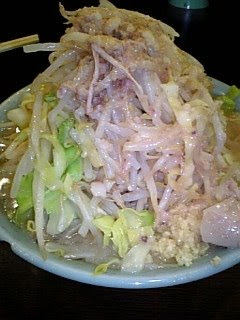 Then there's the sheer volume. A small bowl is probably bigger than a large at most other shops, and I've never dared myself to eat the large or (god forbid) the extra large. There's a whole other system of châshû
pork ordering, of which I'm only dimly aware (I think you can get it "W" = double), but I'm pretty sure that you can ask for a sizeable hunk of pig to be placed (balanced ) on your noodles.

I first heard about the legend of Jirô five or so years back from some friends who were students at Keio University, within spitting distance of the original honten, run by Jirô's famously cranky old man of a founder (who is not named Jirô). I remember receiving a text message saying something like "We just ate MONSTER RAMEN. The line was so long. While we were eating, a pigeon flew out of the rafters. It was so oily that we almost vomited on the pavement after we stepped outside."" Naturally, it sounded awesome. Nonetheless, it took me several years before I could find an opportunity to go to Jirô, and I still as yet have not made pilgrimage to the godfather store in Mita from which all other Jirôs are descended. There are now dozens of shops all over the Tokyo metro area, easily identifiable by the bright yellow and black signs. Jirô has even been featured on NPR: www.npr.org/templates/story/story.php?storyId=1604480

The first time I went to Takadanobaba Jirô, 2 years ago, all I could do was just mutter the word "Jirô" over and over while slowly shuffling down the street. The next time, I used Jirô to replenish my strength after climbing Mt. Fuji. Jirô this time was a somewhat more straightforward experience; There were about 5 people waiting outside, and another 3 or 4 inside at the back of the store, stretching down the stairs to the bathroom. Naturally, it was almost all men in line. Jirô is also shockingly cheap. Considering that sometimes lines at Jirô look like this, a line of ten or so was not too bad: 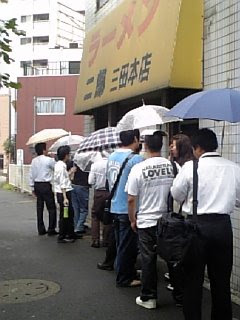 Within 15 minutes I was at the counter, fully prepared with my own bottle of oolong tea and pack of napkins. Jirô was as fatty and delicious as ever. I got a regular (=huge) bowl with extra garlic and spicy topping, and proceeded to relish it. Time seems to stand still as the bowl of noodles, hidden under the mass of toppings seems to last forever, with the brown oily soup becoming a Felix the Cat like magic bag in which more noodles and veggies can always be found. I took my leave so that the next sweaty salaryman could take my place, taking care to use the towel provided to wipe the oil off the counter. I felt comparatively light after walking out (for Jirô), but still could feel that oily film around the inside of my mouth for about 24 hours after. Plus, I'm pretty sure my pores were emitting the smell of liquid pork. 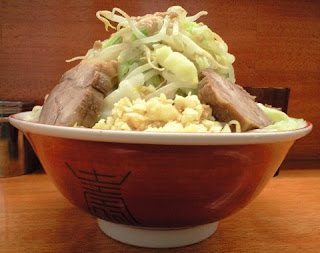