It seems like once the tonkotsu seal had been broken, tonkotsu was all I wanted to eat. Yamagoya was good, but it left me wanting some Hakata ramen with a bit more oomph. My map showed that within the vicinity of the station there weren't too many pure Hakata style joints, so it was easy to pick Nagahama. Nagahama ramen refers to (in my understanding) a specific area or neighborhood in Hakata (Fukuoka), but I think Nagahama ramen has probably long since become undistinguishable from non-Nagahama Hakata ramen. Though I wouldn't be surprised that if you go to Nagahama, wherever it might be, that people would argue vehemently to the contrary.

The other reason why Nagahama ramen specifically appeals to me is that my favorite place for ramen in Kyoto was a Nagahama ramen joint. Back then I had no idea that Nagahama referred to a general style or kei of ramen, and just thought the store was named "Nagahama." Actually, I think it was a couple of months before I even knew the store had a name - I and everyone else I knew just referred to it as "that smelly place" or "stinky ramen." The distinctive tonkotsu scent (or stench, depending on who you ask) was particularly strong there. "Stinky Ramen" was near the bridge over the Kamogawa river right as you turn from Sanjo-dori onto Kiyamachi, the main bar and nightlife street, and the smell was thus unavoidable to all patrons passing through this busy pedestrian intersection. 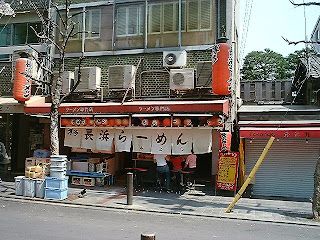 That Nagahama ramen joint was my very first introduction to the Hakata style that would be my ramen mainstay. It was small, dirty, cramped, and open to the street, with all the necessary toppings laid out. This is where I learned to go heavy on the beni shoga, takana, and garlic, and many bowls (and kaedama) were consumed either before, or more often, after, nights of heavy drinking. Lots of my friends avoided the place like the plague, but I loved it. The broth was thick and kotteri, and they also had a kimchi ramen. Plus I vaguely remember there being some topping that was almost like rice krispies that I've never seen anywhere else. 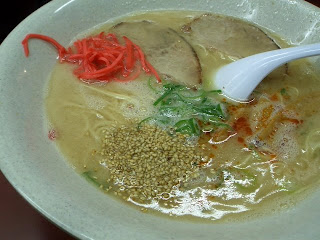 I heard that the Kyoto Nagahama ramen joint might be no longer. Whenever I go back to Kyoto I always try to swing by for a bowl - here's hoping that it's still there when I'm in town next weekend. But, this post is not about Kyoto Nagahama ramen, it's about Nagahama Ramen Botan in Takadanobaba. Definitely in a bit better shape cleanliness-wise than my old haunt, but still straight up no frills ramen shop atmosphere. A counter, a couple small tables, a ticket machine, not a whole lot else. Based on the style of the sign, it seemed like it might be a chain (probably small scale in Tokyo), but the ramen Botan served up was high caliber. 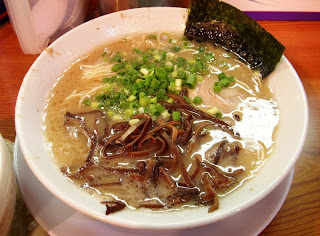 Thick but not quite kotteri white broth, thin white noodles, exceptional kikurage, takana and beni shôga on the table, nothing to complain about. I feel like when it comes to Hakata ramen, it's hard to write about the subtle differences in the soup - more than most ramen places, Hakata joints tend to fit a very specific mold as to style and toppings. One nice thing about Botan is that the ticket machine has separate buttons for how "al dente" you want the noodles. When it comes to Hakata ramen, I know the done thing to do is to get them as hard as possible, but I'm a bit of a wimp that way and like them softer. For my kaedama however, I asked for "soft" rather than "medium" and the noodles were a bit too soft, clumping together. All the flavors blended to get that rich Hakata taste. I'm not sure anywhere could match my Nagahama memories from Kyoto, but I did end up drinking down every last drop of the soup. There was a little bit of grit hanging out at the bottom of the bowl - is that bits of marrow? I prefer not to think about it, but I heard the really hardcore places in Kyushu often leave it unstrained. I went home satisfied, and for some reason my skin didn't even give off the scent of pork fat that night.
Posted by Nate at 6:54 AM