(NOTE: Kazusanbô is now closed, another casualty of stiff competition)

This was a good bowl of ramen, but maybe not such a good choice after having just eaten at Jirô. For whatever reason, this place didn't look very appetizing from the outside, so I was kind of expecting it to suck, but I ended up being pleasantly surprised. However, as I should have guessed from the bright yellow and black sign, Kazusanbô is a store going for a Jirô-like taste, which has pretty much become a genre at this point.

Kazusanbô, which seems to be a small-scale chain, offers a few basic varieties of ramen, but as is my custom, I went with the basic tonkotsu ramen on the ticket vending machine. This turned out to be a bowl of noodles very close to Jirô in soup style and taste, if not in format. There was the same light brown shôyu-tonkotsu broth, the same bits of floating fat in the soup, and thick (though not overly so) noodles. However, Kazusanbô's ramen was almost completely lacking in toppings. Although several basics such as corn and extra nori (seaweed) were available for extra charge, the basic bowl just had a few shreds of whitish scallion and a few bean sprouts, a far cry from Jirô's veritable mountain. This was perfectly fine with me, as I had no desire to eat a second bowl of Jirô that week, especially caught unawares. 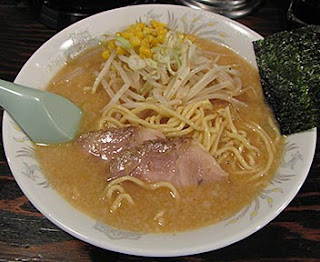 One strange thing about my trip to Kazusanbô is the fact that for the majority of my meal, I was the only customer, despite it being dinnertime, and despite it being a large store with a wraparound counter. That always makes me feel a little strange - firstly in that I imagine I can feel the cook's eyes on me, waiting to see how I like his ramen. Secondly, I always worry that maybe the place is about to go out of business. Takadanobaba is a tough place to make it as a ramen shop, and no matter how mediocre a bowl of noodles, it makes me sad to imagine someone's dream of becoming a ramen master crushed. By the bottom of the bowl, a few more people trickled in and when I got home I found out that Kazusanbô is a local chain, so I didn't feel so bad.

In the end, this was a tasty, if a bit plain bowl of ramen. If I am ever in the mood for something Jirôesque, without wanting to bike down to Jirô, wait in line, then anticipate stomach troubles the next morning, it's good to know that Kazusanbô is close by. Though it still took me almost a full day to get that oily pork taste out of my mouth.
Posted by Nate at 7:52 PM

If you're talking about the one in Bentencho, then it's still open. I was just there this June.

nope, this one was further west on Waseda-dori towards Baba - the shopfront is currently occupied by Kuromonya. I've still gotta go to the Bentencho location...