This time, I ventured a bit south of the main drag on Waseda-dori, down Meiji-dori just next to the entrance to the Fukutoshin line Nishiwaseda subway station to eat at the honten (original branch) of the "Ezogiku" (Ezo Chrysanthemum) mini-chain. As "Ezo"（蝦夷) is the old name for the northern island of Japan now known as Hokkaido, Ezogiku naturally specializes in Sapporo-style miso ramen.

Apparently, Ezogiku is quied a storied shop, opening in the 43rd year of the Showa era , which by my calculations is 1968, though I'm not sure my calculations are correct. In any case, it's a store with a lot of history, and apparently was both the store that brought the idea of "Sapporo ramen" to Tokyo, as well as one of the first to make Takadanobaba's name as an important site for ramen. There's another branch just up the road on Waseda-dori, but this is the original. As the original, it wasn't surprising that there was a line even at 8 PM on a random weeknight. There were benches set up to make the wait easier - about five people outside and another two or three inside, adding up to about a 15 or 20 minute wait.

Perhaps because the store is older, perhaps because it's off the main drag, perhaps because miso is not currently in vogue, or perhaps because it is comparatively "unreconstructed" in this age of high design "ramen dining," the crowd here tended to skew a bit older than any of the other shops I'd visited so far. Also in line were a few retirement-age couples and a group of construction workers employed at one of the interminable road resurfacing projects that are always going on in Japan. 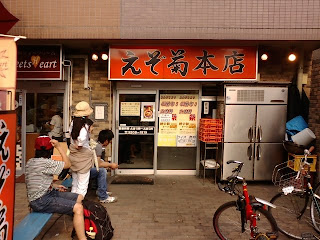 Inside, things were pretty no frills, with two older no-nonsense types hard at work behind the full counter. Although they offer all the basic varieties of soup, miso ramen is of course de rigeur, and that's all I saw anyone order. When one of the construction workers ordered the ramen with "the works" (every shop seems to have their own word to describe ramen fully loaded with a garbage can's worth of toppings on it), the cook asked the worker (who was quite burly), "Are you sure?" and he backed off, ordering a basic bowl with extra pork.

I got the basic miso ramen with corn (deciding to pass on the other standard Sapporo-style topping, butter, for the moment), and to be honest, I was a bit underwhelmed. Maybe my expectations were too high due to the fame, but I think it's more likely that miso ramen can only do so much for me. The noodles were thick and tasty, but nothing special, though even if they were, noodles alone can rarely make a ramen shop great. Another thing lots of shops (including Ezogiku) do that I don't care for is to pile high the bean sprouts - I like to be able to grab nice chewy hunks of noodles unencumbered by the crunchy sprouts. I've also always had a grudge of sorts against the things - there's nothing worse than fishing around in the bottom of a bowl of soup and thinking you've grabbed a last noodle only to find out it's a bean sprout instead. 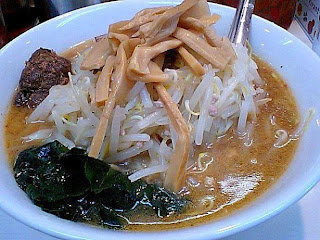 I had always thought I had a soft spot for miso ramen, but upon reflection, I realized I hadn't actually had it in years, and the assumption had been due for a reality check. I was somewhat shocked to realize that I might have to bump miso down on my list and bump shio up. I really wanted to like Ezogiku, but I just couldn't get all the way behind it. It had just the kind of vibe I like, totally old school, serious ramen. They even gave me a huge free bowl of menma (bamboo shoots) to snack on with my beer, since I passed on the pork châshû. Sadly, the miso just didn't do it for me, even though I think it's mixed with tonkotsu broth. I may go back one more time to try the spicy miso, but that's probably about it. I do have it on good authority, however, that the gyoza are outstanding and worth a trip in and of themselves.
Posted by Nate at 6:02 AM